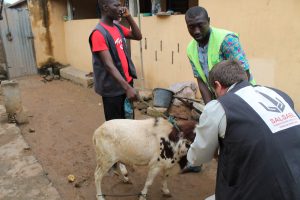 Akika – is a sacrifice that is committed by Muslims, at the birth of a child, after which they shave their heads. But shaving of head not necessarily must  coincide with Akika’s ritual, even so it is preferable.

According to the three Imams of the leading Islamic madhhabs (Al-Shafi’i, Malik and Ahmad), Akika is an insistent Sunnah (Sunna Muakkada). Especially, by such sunnah that it is extremely desirable to sacrifice, if there is possibility on that.

Akika is performed for a newborn also if the child dies during childbirth (or soon afterwards) – and even with such a sad outcome, Akika remains a desirable action. When a baby who has already died at birth (but he was alive in the womb), then for such a child it is also necessary to perform a sacrifice. If the baby was not alive (that is, he did not give any signs of life) – then Akika is not made for such a child and he is not called by the name. (God knows best)

For a boy it is advisable to sacrifice two rams. If there is a possibility, then it is more desirable to sacrifice rams of the same age. Sacrifice of one ram also will be enough to fulfill the Sunnah of the Prophet Muhammad (peace and blessings of Allaah be upon him). For a girl it is desirable to sacrifice one ram. In the case of the birth of several babies at once (twins, triplets, etc.), then one animal is sacrificed per child.